Towing Semi Out of Deep Snow with Ford F-150 FX4 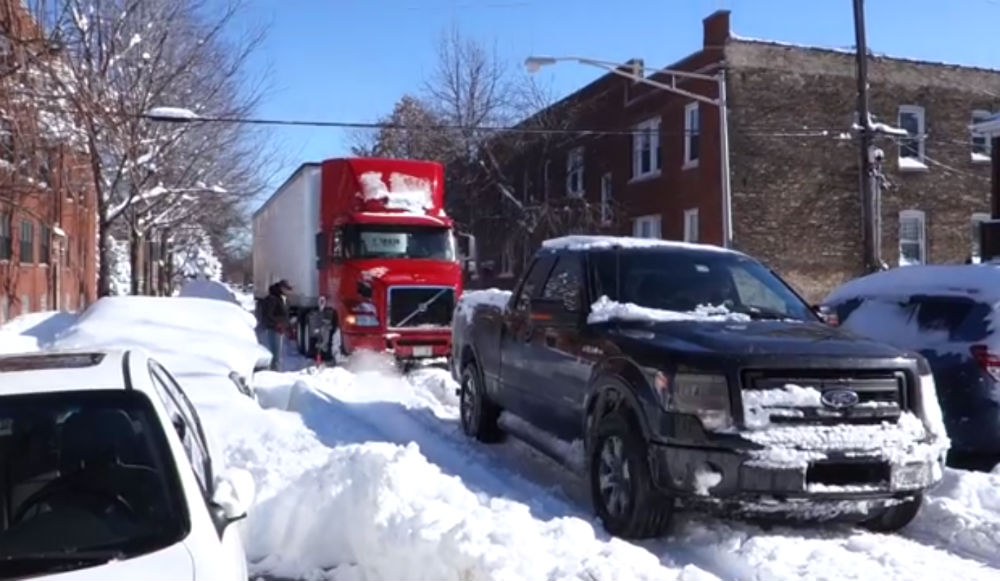 The first months of 2015 have been shaping up to be quite the year of snow and bad weather. Especially in places like Boston, snow accumulation has shot well past previous records. Despite the bad weather conditions, semi truck drivers like the one featured here are still on the hook to get the goods delivered on time. Which is why it’s great to see a light-duty pick-up truck like the Ford F-150 come to the rescue.

While the Volvo line of semi tractor trailers are known for reliability and endurance, snow can and will push these beasts to their limits. Especially when roads still have six inches of snow – there’s no winning against nature. Or is there? This Ford F-150 FX4 manages to power through despite the poor traction to help a Volvo out. Bad weather apparently makes for great new friends.

When Ford announced there would be no 2016 F-150 Raptor, fans through a fit! However, Ford has long cultivated its place in American pick-up truck manufacturers by providing a great entry level lightweight pick-up perfect for taking the rigors of the outdoors. The standard option engine for the 2015 Ford F-150 FX4 is a respectable 3.7L V6. END_OF_DOCUMENT_TOKEN_TO_BE_REPLACED

However, on the far side of the spectrum and certainly something to be highly coveted is the 6.2L V8 which boasts a whopping 434 lb-ft of torque at 4,500 rpm. For the cheap seats

However, on the far side of the spectrum and certainly something to be highly coveted is the 6.2L V8 which boasts a whopping 434 lb-ft of torque at 4,500 rpm. For the cheap seats, that’s an equivalent drop of 6 miles to the gallon. The standard package gets a cool 19 mpg combined while the high end V8 guzzles at 13 mpg. Is the increase of a hundred pound feet of torque and horsepower worth it? The real measure is the towing capacity and payload shift. In the upper end V8 model of the Ford F-150 FX4, it can haul over three thousand pounds of cargo and pull almost four times as much in towing. For those looking to pull a semi tractor trailer out of the deep snow – that’s a great thing to have on your side.

Round View 360° Camera for Off Road Awareness

One of the really neat features of the 2015 Ford F-150 FX4 is its console display of its four camera sensors placed about the truck. It allows the driver to get a real look at what’s going on and decide how much room he or she has to move about. Even better is it offers a simulated full 360° view on one screen – allowing the driver to intuitively see his surroundings on all sides simultaneously. Where’d Ford come up with that idea? Well, none other than the Nissan Titan was the first truck to feature this technology on standardly equipped models. As Ford reps put it, “it’s one of the smartest things you can do” in terms of safety and awareness. It’s the same technology also featured in BMW and Infinity models. Glad they finally brought that to where we really need it – off road trucks!

One of the great things about Ford is they continue to innovate with each model of the F-150. While the F-250 and F-350 really may not change much year to year, Ford remains overly cognizant of the fact that the F-150 is often times a person or fleet’s first major buy-in for their pick-up truck line. That’s why they continue to improve on their already great suspension system. The 2015 F-150 FX4 features an independent double-wishbone front suspension with a coil-over shock system and stamped lower control arm. In the rear, in order to get the most payload into the back, they went with a true form leaf spring with solid axle design which has withstood the test of time. And taking from the after-market modders, Ford brought in a newly redesigned heavy-duty gas-pressurized shock system for the front and rear. Coupled with a powered 4-wheel anti-lock vented disc brake assembly, the F-150 is built for power, performance, and withstanding the elements. That’s why they perform so well in pretty strenuous torture tests.

One of the winning features of the F-150 FX4 light-duty pick-up is it’s ability to handle harsh terrain right from the get-go. This clip shows off some of its impressive handling skills in a mixture of different environments. One thing is absolutely clear, though – the F-150 FX4 doesn’t try to compete with the F-150 Raptor. It’s made for work. But that doesn’t mean it won’t be expected to play as well. Ultimately, while enthusiasts will undoubtedly wait until the Raptor makes its reemergence onto the market, the F-150 FX4 is certainly a great step forward. Obviously, it’s still got all the power in all the right places – in a professional looking package.