How Not to Tow Your Truck 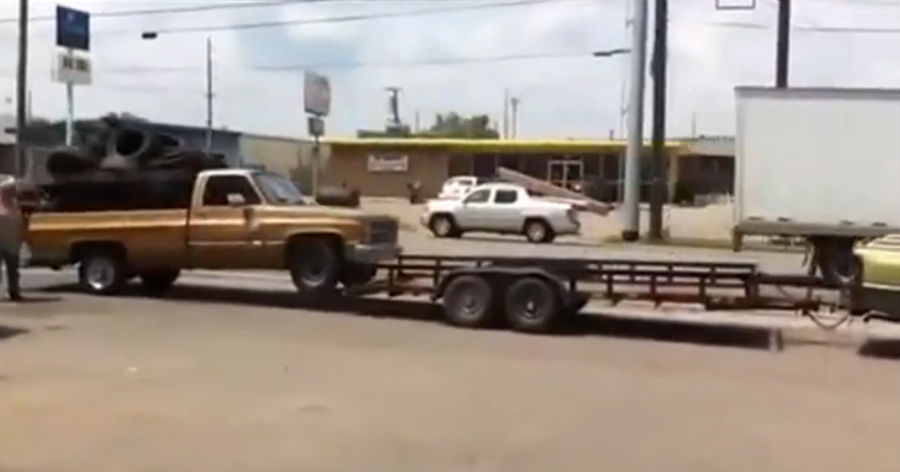 We’ve all been there – stranded on the side of the road, looking for a reliable tow truck. Now, there’s the right way of going about this and then there’s the wrong way. And in this incident, we get to see how it’s not supposed to be done. Thankfully, the only harm that comes of this can be seen below.

But it brings up an issue that gets too oft overlooked when dealing with towing another vehicle. There’s a concept in physics known as inertia. It’s defined as the resistance of any object to a change in its state of motion – which can include things such as speed and direction. An object at rest tends to stay at rest.

And conversely, a moving object keeps moving until a force is applied to it. Thankfully, living on planet earth, gravity acts as a downward force which brings all objects to rest given enough time. It certainly saved these truck drivers from getting into much more hassle than either would have wanted. Cars that are parked tend to stay parked unless work is applied. END_OF_DOCUMENT_TOKEN_TO_BE_REPLACED

In this case, when you take a two ton truck and push it into the back of another, the force applied will overcome inertia and translate into the parked vehicle’s forward momentu

In this case, when you take a two ton truck and push it into the back of another, the force applied will overcome inertia and translate into the parked vehicle’s forward momentum. This can be commonly fixed by having brakes that will compensate for that. But a brake is only as effective as the human being operating it.

Using a Trailer to Tow

Having a friend or family member with a trailer can save you a lot of hassle, time, and money if your car does decide to break down. However, that trailer needs to have locking brakes to keep it stationary during the loading and offloading process. That is ideally in addition to functional brakes on the lead vehicle. Else, it will attempt to transfer forward momentum to the hitch, which in turn will endanger your tow vehicle’s ability to compensate. Most vehicles have a braking power well in excess of what’s needed to stop. Depending on the age of the vehicle, its upkeep and your own personal operation – it may not have enough to bear the burden of itself plus a trailer plus an overloaded truck. Most DOT-approved trailers have independent stationary brakes to prevent such catastrophes. If, for some odd reason, the person offering to tow your vehicle doesn’t have those brakes engaged – please let them know that’s a bad idea. Preferably before you find your vehicle surfing down the street on a trailer.

Trailers have a limited range of motion while attached to the back of a truck. If it is bearing a load in excess of the weight of the vehicle pulling it, there is a real threat of a locked-out jacknife incident taking place. The Commercial Driver’s License (CDL) manual specifically refers to these situations because it’s a big problem. It’s a veritable “no-win” scenario if the trailer is pushing up at a 90° on the ball joint of the tow vehicle.

And lastly, once you have loaded the vehicle safely onto the back of the trailer – secure that vehicle with tow straps, chains, and its own brakes (if still operational). To dabble into general relativity, the towed vehicle, once on the trailer, experiences forces upon it as if its on a standing platform. Things like the vibrations caused by running over a pothole or even the wind can nudge that vehicle from a state of rest to one of motion. That’s bad news if your tow truck is barreling down the road at 55 mph. It’s even worse news if there’s an unfortunate soul stuck driving behind. Always secure your load prior to departure and make sure it’s tied down. It’s just common sense.