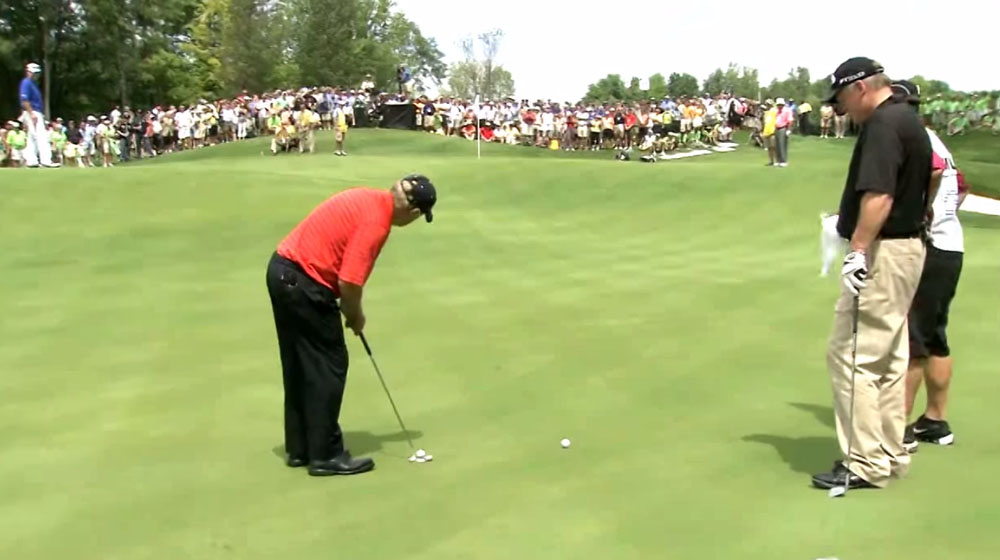 What you’ll see at the bottom of this post might be the best display of badassery of the year. Jack Nicklaus totally owning Johnny Miller with an insane 102 foot putt. This was shot on Harbor Shores, which is the site of the Senior PGA championship. This was one of the exhibition open rounds and the guys were having a good time. Tom Watson and Arnold Palmer were also present and you can tell they all got a kick out of that incredibly long putt.

Now whether or not he actually meant to make that putt nobody can be sure, but his braggadocious style and swagger as he walks away certainly made it look like it could have been pulled off with ease. However, if you are a golfer you know that this is anything but the case. Putting can be one of the most frustrating aspects of the game.

Consider the fact that 60-65% of your strokes will take place 100 yards from the pin. Then 43% of that number of strokes will occur while putting. Many players die on the putting green every Saturday.  That is life when dealing with your short game. Most often, players tend to focus on their long drives because they feel most like a man, crushing the ball off the tee, then sending it soaring 250 yards down the fairway. END_OF_DOCUMENT_TOKEN_TO_BE_REPLACED

However, the reality is that the real skill enters once you approach the green. Any caveman can learn to swing a club hard enough to propel an object several hundred feet. I mean

However, the reality is that the real skill enters once you approach the green. Any caveman can learn to swing a club hard enough to propel an object several hundred feet. I mean after all, we are guys, that’s what we do.  To succeed on the green, where half an inch can cause you to miss the cup, is pretty nerve-racking. Yet, if you look closely, these guys seem nonplussed by the whole affair. They are on the famous 10th tiered hole of Harbor Shores and Johnny quips that there is really no chance of putting it. He doesn’t know what to do. Then Jack steps up and gives the ball a swat. It rolls up one hill, breaks to the right, then rolls up the other hill, breaks to the left, and plops right in the hole!  The crowd is obviously shocked and Jack walks away as if the whole thing was just literally a walk in the park. It is obvious that Mr. Nicklaus has worked on his 43% short game, right?

Yet, even though he is a professional golfer, consider this. The statistical probability of his chances of making a 102 foot putt make the shot even more incredible. 95% of tour professionals will sink their putts from 3 feet or less. 75% of golf pros will sink a putt that is 5 feet from the cup. A 7 foot 10 inch putt has a probability of only 50%. A 14 foot putt will only be made 25% of the time.   That means only one out of every four 14 foot putts will see the inside of the cup. If you take those numbers and extrapolate them out to 100 feet, you come up with a pretty stark percentage, 1.78%. That means just under two out of every 100 foot putts will be made! His stats will soar even higher because of the extra 24 inches that I did not calculate into his putt. Now, look it this again and tell me, did Jack know he was going to make that putt, or did he just get really, really lucky?