The Best Lawn Mower Tug of War Yet 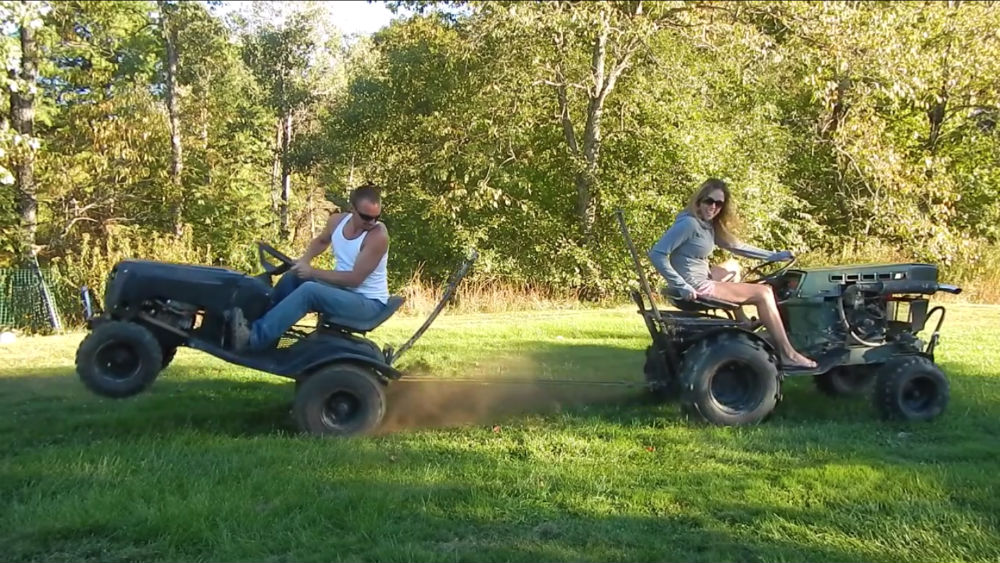 This is a real thing of beauty. Two lawn tractors, a guy, his gorgeous wife, and a tug of war battle. Well almost. This features a Murray lawn tractor and a Sears Diesel lawn tractor that have both been modified for off road competition. What that means is essentially the blades and blade carriage have been removed, while a nice wheelie bar has been added for stability and balance.

I’m sure there are other mods that lawn tractors endure before becoming competition worthy machines, but these appear to be rudimentary modifications at best. The idea is to show off the might and power of the lawn tractors “in the raw.” Well, they do not disappoint in that regard. At least one of them doesn’t. The Sears diesel pulls the Murray around the yard like it is a common slinky. It never stood a chance!

He even skated sideways a time or two and had to look back to make sure she was not going to pull him onto his side. Did the guy know that, perhaps? Maybe so. Maybe that is why he issued the countdown himself. If this were a street race, he might have had the upper hand. But this is not a street race. In fact, this is not a race at all. END_OF_DOCUMENT_TOKEN_TO_BE_REPLACED

This is a tug of war, so countdowns don’t matter. Horsepower does. The Sears diesel seems to have enough to do the job, too. Though we are not looking at a souped up Mustang wit

Why the Woman on the Lawnmower is Smiling

This is a tug of war, so countdowns don’t matter. Horsepower does. The Sears diesel seems to have enough to do the job, too. Though we are not looking at a souped up Mustang with 357 horses under the hood, we are looking at a stock lawn tractor engine that will easily put out 9-15 horsepower depending. It might look like this was the deciding factor when you view this, yet look again and you might see why that guy’s wife is smiling from the word “Go!”. Her back tires are huge! Now, I’m not recommending you go up to a woman and compliment her on the size of her tires. Saying something like, “Hey, Ma’am, you have the biggest set of tires I have ever seen”, might get you slapped or worse. Ladies can be touchy these days even if you don’t mean to cause offense. If you do decide to toss that one out there, just make sure she understands you are talking about the tires on her lawn tractor. Now back to the matter at hand.

Why Traction Gives the Upper Hand

Traction plays a huge role in how well vehicles perform on the road and in competition. If you are involved in any sort of event where words like “tug” or “pull” are used, you want to make sure you have plenty of traction. Good traction will more than compensate for horsepower, so long as the engine size is close. In this case, the Murray lawn tractor never stood a chance. Not only is the Sears diesel engine a beast in its own right, those big tires have awesome tread that provide great traction. Notice how the Murray slides all over the yard while the Sears diesel keeps plowing ahead. That, my friends, is the power of traction! All sorts of things come in to play in order for traction to be effective.

Everything from the composition of the two surfaces that will be in contact with each other to speed and how lubricated the opposing surface is. Pardon me for waxing a bit scientific; I still recall much from my days of 9th Grade Physical Science. At any rate, all you need to know for tug of war events is this – he (or she in this case) who has the biggest tires with the best tread wins. The big knobs and wide surface allows the tires to make as much contact with the ground as possible, giving the Sears lawn tractor a leg up before the competition ever started. Come to think of it, maybe that fella knew that. Following the basic rule of husband-wife relationships which states “If the wife smiles first, you will smile later,” I would say he knew she would win. Clever guy. No chocolates or flowers needed. Just two lawn tractors and a rope. Remember this one. You can thank me later.