Excavator Tractors Dancing is a Must-See 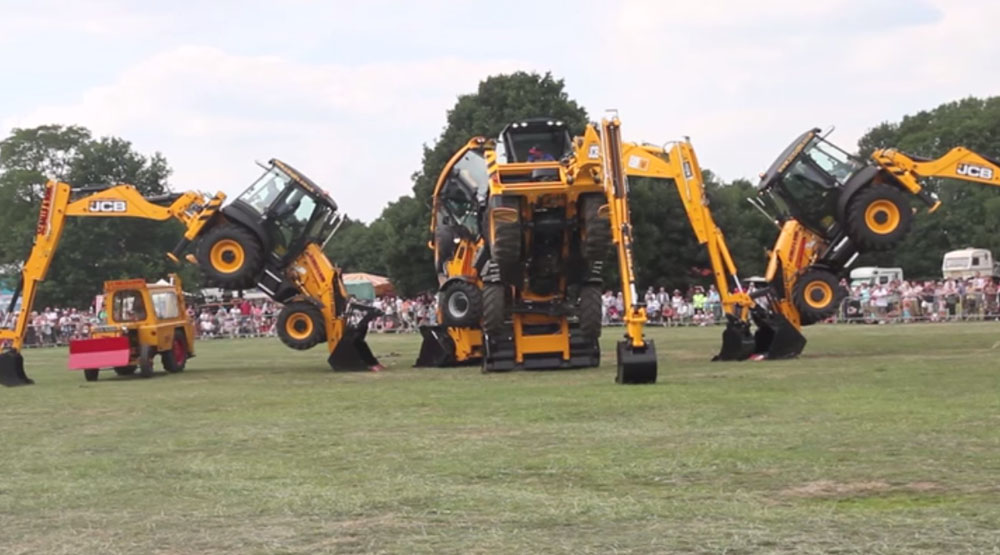 America has a number of unique traditions like baseball, infusing just about everything with pumpkin spice, and eating turkey every November. Included among these traditions is the practice of dancing using tractors. Many people who have been to state and county fairs or other gatherings in the heartland of the United States have beheld this incredibly unique practice, which is something that has captivated and thrilled audiences for some time.

According to Modern Farmer, the first time tractors engaged in a dance was back in 1953. International Harvester came up with a unique way to demonstrate how quickly anyone could attach different implements to the new Farmall Super-C tractor, making a dance of the practice. Members of the public were so captivated by the advertisement that they began mimicking it, eventually coming up with different ways to make their tractors dance in elaborate configurations.

The practice was fairly low-key until the late 1990s, when one of the groups captured a sponsorship from International Harvester. Other things like YouTube videos of the dances have worked to popularize it even further. There are a number of tractor dancing groups in existence, but nobody is really sure just how many. Some groups get together only once or sporadically to perform, while others are well-organized, have webpages and even rent their services out for events far away. END_OF_DOCUMENT_TOKEN_TO_BE_REPLACED

According to several reports, most members of these groups are older, often in their 60s or so. People do it for a number of reasons, including to see if they can actually pull th

According to several reports, most members of these groups are older, often in their 60s or so. People do it for a number of reasons, including to see if they can actually pull the seemingly difficult choreography off, to entertain members of their community, and to keep alive a slice of the past. Traditionally, groups are made up of eight tractors. The dance form they engage in is the square dance, which is quite appropriate considering it is a quintessential American dance. Just like in a regular square dance, there are male and female drivers. Sometimes there are actual women driving the tractors, but in some groups half of the men dress in drag for the performances. There is also a caller who gives verbal instructions, called patter-call. Many groups modify the traditional square dance calls and sprinkle in some references to tractors and farming, also giving the drivers extra time to perform the necessary maneuvers.

A number of the groups stick with vintage, narrow tractors with small front wheels not only for their nostalgia, but also for their excellent maneuverability. There are some newer groups that use wider tractors, either mixing them in with the old style or going completely modern. Tradition also calls for the drivers to wear old-time farmer clothing, such as overalls and plaid shirts. As is the case with most performance art, some people have modernized tractor dances, putting unique spins on the American practice. Machines like backhoes and earthmovers are used, sometimes in square dances and sometimes in other forms. As the tradition has spread to other areas of the world, different cultures have put their unique signature on it. For example, dancing JCB backhoes have been featured at the Elvaston Steam Rally in Derby, which is located in the United Kingdom. Instead of performing to square dance calls, the five drivers maneuvered around to more modern rhythms like Van Halen’s “Jump” and U2’s “Elevation.”

At different points of the performance, the machines were raised up into the air partway by their own arms, adding to the acrobatic nature of the event. The purpose of the performance was still to entertain, but also included a component of showing off the machines’ and drivers’ abilities. At another event, a single driver showed off by performing moves that more closely resembled a mechanized brake dance. While the nature of tractor dancing might be changing, the practice seems to be growing in popularity instead of decreasing. Chances are that sooner or later, no matter where you live, you will have the chance to see such a performance live.